Almost every breed of dog is predisposed to one or more health conditions, meaning that specific breed tends to be more affected by that condition than other breeds.  Heart disease in the form of Dilated Cardiomyopathy is one that typically affects breeds such as Great Danes, Boxer, , Irish Wolfhounds, St. Bernards, and Dobermans.  Dilated Cardiomyopathy, also known as DCM, is a disease affecting the heart and not allowing it to contract as well as it should, which can lead to an enlarged heart, arrhythmias, congestive heart failure, and sudden death.

In the past 2 years, veterinary cardiologists began seeing an increase in dogs diagnosed with DCM.  Many of these dogs are breeds not generally thought to have DCM, such as Golden Retrievers, Labs, Cocker Spaniels, German Shepherds, Pit Bulls, mixed breeds and others.   Numbers of cases of nutritional DCM reported to the FDA spiked from a few a year, to over 300 in 2018, and almost 200 in the first few months of 2019.  Not every case gets reported.  Not every animal with heart disease receives a diagnosis from a cardiologist via an echo.  Actual numbers of affected animals are likely much, much higher. 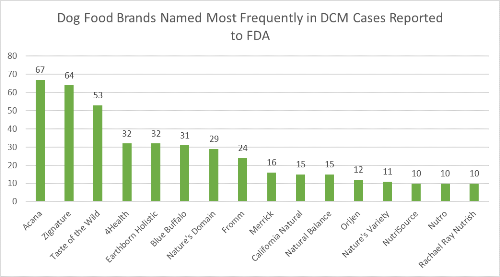 When evaluating reports, it was found that many of the affected dogs had been fed what are known as BEG diets (Boutique diets, may contain Exotic ingredients, and many are Grain Free). 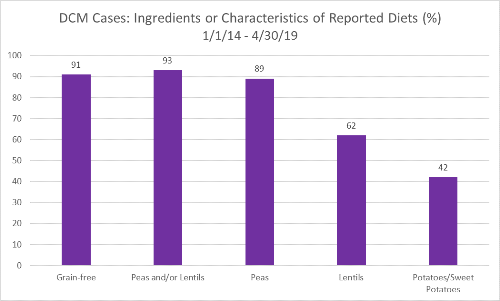 Diets marked as being problematic usually contain peas, lentils, legume seeds, or potatoes, and those ingredients are listed in the top several on the ingredient list.  It is not yet known how these ingredients play a role in DCM.

When caught early, with a diet change and medications, some cases of DCM have been reversed and the animal is totally healthy again.  However, many dogs are still dying from this nutrition based heart disease.

When choosing a pet food, you want to choose a food that is approved by the World Small Animal Veterinary Association.  WSAVA has a list of criteria food companies must pass to be approved.  Brands approved include Purina, Hill’s, Royal Canin, Iams, and Eukanuba.  These brands have veterinary nutritionists on staff and have done a lot of research behind the science of their food to ensure it is well-balanced and good for the pet.  None of these brands have been reported in the dietary history of dogs diagnosed with nutritional DCM.

If your pet is eating a diet that has been named as causing nutritional heart disease, please talk with your veterinarian.  Is there another diet that your pet could switch to?  Should your pet’s heart be further evaluated?

New Clients Save $25 off Your First Visit